On November 12, 2021 our beloved, lunch-time, organ concert series returns after a pause due to
the Covid-19 pandemic. We are very pleased to welcome back Dr. Angela Kraft Cross, from the San
Francisco Bay area as our distinguished performer.  The concert begins at Noon and will last
approximately 45 minutes. All are cordially invited to attend this free concert. A donation is
suggested for those able to help offset the cost of travel and accommodations for the guest artist.
For more information about Dr. Kraft Cross, please see below. 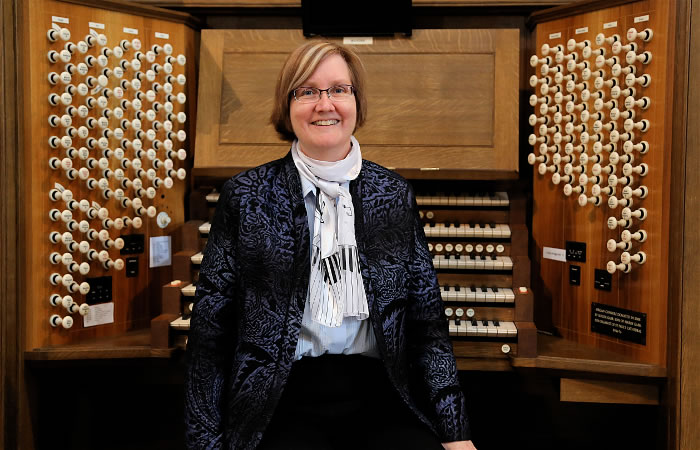 Dr. Kraft Cross Biography – excerpted from her website:
Dr. Kraft Cross has performed extensively on both organ and piano, having given over five hundred concerts across the United States, in Canada, England, Holland, France, Hungary, Korea, Lesotho and Guam, including such venues as Notre Dame Cathedral, St. Sulpice and the Madeleine in Paris, Washington National Cathedral in Washington, D.C., St. Patrick’s Cathedral and St. Thomas Church in New York City, Methuen Memorial Music Hall and Trinity Church in Boston, E. Power Biggs’ organ at Harvard, and Westminster Abbey, St. Paul’s Cathedral and Southwark Cathedral in London. She has released eight solo CD albums, recorded locally in California as well as in Paris, Lyon and London. Three of her organ albums have received critical acclaim in The American Organist magazine. Her most recent releases include a 2013 CD of her organ compositions entitled Sharing the Journey, recorded at the Cathedral of Our Lady of the Angels in Los Angeles and in December 2016, her new WIDOR chez Widor album, featuring Symphonies 4,5,6 and 7 on Widor’s hometown Cavaillé-Coll organ at St. François-de-Sales in Lyon, France. Her organ recordings can be heard on Pipedreams with Michael Barone on American Public Media. She has served as the organist of the Congregational Church of San Mateo since 1993, and is currently the Artist in Residence. She is also a regular organ recitalist at the California Palace of the Legion of Honor in San Francisco. In addition to her musical career, Dr. Kraft Cross retired in 2011 having worked for 22 years as an ophthalmic surgeon at the Kaiser Permanente Hospital in Redwood City, and now volunteers as an ophthalmologist at Samaritan House in Redwood City. For a full bio please visit angelakraftcross.com.